I attended my fi 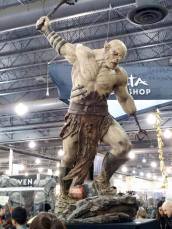 rst Comic Con in Philadelphia this past weekend and it was an interesting experience, to say the least. First off, everything they tell you about preparing for crowds, long lines, lots of walking, etc. is true. Even at the scaled-down version in Philly (4th largest after Comic-Con International in San Diego, ReedPop’s New York Comic Con and Wizard World ChicagoCon). Wizard World Comic Con Philadelphia was expected to get 90-100k attendees this year which is quickly approaching the 130-140k that attend the main Con in San Diego. That said, it’s still doable to cover the entire main exhibitor floor in a day.

Just be patient and try not to be overwhelmed (I found myself wishing I had a Valium on more than one occasion). The crowds make navigation

difficult, particularly around the autograph lines. And everywhere you look there are people in costumes posing for pictures. So you will constantly be walking through photo ops. It’s impossible to avoid. You will be a professional photo bomber by the end of the show.

You’ll also have lots of celebrity sightings, but getting up close and personal is another story. The price you pay for admission is just that. Everything costs money so bring cash if you plan on attending a celebrity meet & greet or even want to photograph certain exhibits. For instance, it is $10 to get a photo with the batmobile.

I mainly went to check out artist alley and see what I’d have to look forward to if I ever exhibited at one of these shows as I’ve heard it’s a great place for authors to gain exposure if their fan base attends these shows. Sidebar: I’ve never seen so many fangs in one place, way to represent vampire fans! I was expecting to see a bunch of fellow fantasy and science fiction authors on hand and was initially surprised there weren’t more exhibiting. I spotted a couple publishers and a handful of indie authors with booths. A discouragingly meager turnout. So where were they???

What I learned was that not many of their fans are going to pay the hefty $55-65 ticket price just to get in to get their book signed. Authors have better turn outs at book signings where they don’t have to pay $400+ for a table and their fans don’t have to pay to meet them on top of buying their book(s). So unless you are a best selling author, you may find the time and expense associated with Comic Con may not be wor

th your while. Authors may contradict this observation, but that was my biggest takeaway from attending.

This convention is mostly for two types of people: those looking for comic book merchandise – posters and t-shirts appeared to be the biggest draw after the comics themselves. And die-hard fans who are willing to pay good money to spend their day waiting in line to meet their favorite celebrity (I’m tempted to say something disparaging here like “D-List” star from hit 80s tv show, but there were a surprisingly impressive number of current “big names” on hand). If you fall into one of those categories, Comic Con is for you.

And if you are an artist whose work fits the genres, it’s probably a good way to get exposure b/c this is likely one of the few outlets you have for appearances. Just know going in that more people are there for the cosplay than to buy your work. 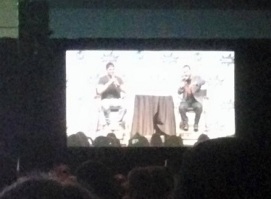 The highlight of the day for me was sitting in on the Stephen Amell panel. Fan or not, you get to spend an hour relaxing in a quiet room away from the exhibit hall frenzy watching film clips and listening to entertaining stories.

While I personally am only a casual watcher of Arrow and wouldn’t call myself a “huge fan” by any means, I still enjoyed the Q&A exchanges. Mostly it was just interesting hearing from the point of view of someone who works in the industry. Stephen had great stories not just of his experiences on set filming, but also from attending other Cons. I could have skipped the showroom floor and spent the day sitting in panels.

Lastly, I’d like to thank Yards Brewery for providing a pop up beer garden. You were vital to my con survival!